During the isolation period caused by Corona, I was playing around with Arduino as a quite small hobby in my free time to create a simple robot that is being controlled by Android. 🙂

The robot uses an Arduino and a Motor Shield to control the motors, but since I am an Android developer, I wanted to somehow make use of Android to control it. 📱🤖

The concept is simple: There is an Android phone on the robot which is connected to the Arduino via a Bluetooth cable and sends commands to Arduino to control the motors.

Because of that, I had to test the USB connection between the Android phone and the Arduino, so I created a simple terminal to achieve this. But the terminal can be used for many more purposes than testing this robot, so I decided to publish it as an open-source project on GitHub and also a free app on Google Play Store:

The robot itself, is still under construction 🚧 🔨 and I will probably send a photo of it when it is done, but until then, please feel free to use the new Terminal and I am looking forward to receiving your feedback. 😉

After searching a lot about how to test the live data returned by Room DAOs for unit testing, I found it would be a good idea to share it with other people. The language is Kotlin and I am using Robolectric to mock the context; But here, I just focus on the problem itself and I’m not gonna explain how to write the tests. You can of course check the links provided in the text. 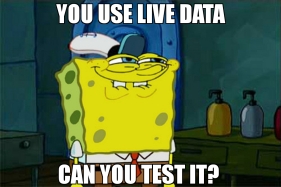 I also have to mention that there are also other workarounds to achieve this, like using Mockito, but honestly in my opinion, this was the most clean approach. But if you prefer those ones, good luck with that. 😊

What did I want to do? Check if the LiveData objects returned by a DAO method are correct; And to have 100% test coverage on those files. 😉

What I did? Created a Kotlin extension function for LiveData object in my test class to block the main thread and wait for the observer to call onChange method and return the value. How? Using CountdownLatch. Read the answer to this Stack Overflow post.

Solution: Well, that’s pretty easy! You just need to add this rule to your test class:

It will allow the liveData observer to block the main thread and Viola!

The answer to this post on StackOverflow also explains it.

Now the tests should work fine and as a reminder, I am running the tests as Local Unit Tests using Robolectric and not as Android Instrumented tests.

The old blog is now migrated to wordpress.com as a  casual weblog. 😎 –NEAT!
The old posts may seem a little bit unorganized since the last website was using the self-hosted version of WordPress with many plugins to support different languages and blah blah! 😀  Why am I keeping such content cram? Just in case I’m gonna miss my old posts about Assembly x86 code and the whole NOOB-ish content I wrote back then. (As well as some of my students in my university workshops when I was their Teaching Assistant!).

So I hope you accept my apology. 🙂 Thank you. And now that I’m a free human being from all those WordPress self-hosted stuff, I’m gonna focus only on posting Android-Dev related content. So whenever there’s something to say about the beautiful and colorful world of Android Development, I’ll post it here with NO hesitation!

It’s gonna be fun, guys. So please don’t hesitate to share your opinions with me. 👍

Kotlin was being used in Android by Android Developers unofficially using libraries like ANKO. Yesterday, Kotlin was introduced as a second officially supported Android programming language in Google I/O.

Here are some links and resources to presentations and tools which I found useful for getting started with Kotlin for Android.

Here is an introduction presented by Wojtek Kaliciński which gives you a better perspective about how to use Kotlin in Android Studio 3.0:
Android Tool Time: Getting Started with Kotlin

I also found this presentation from Hadi Hariri in CERN a good resource to get up and running with Kotlin in about 45 minutes, I really encourage you to watch it.
Kotlin – Ready for production by Hadi Hariri

I hope these resources help jumpstart your next Android project using Kotlin and improve your productivity in Android Development.

Today I changed the language of the website from Persian to English and German. The old posts will be available in Persian in both versions.

Please do not hesitate to contact me if there were any problems.